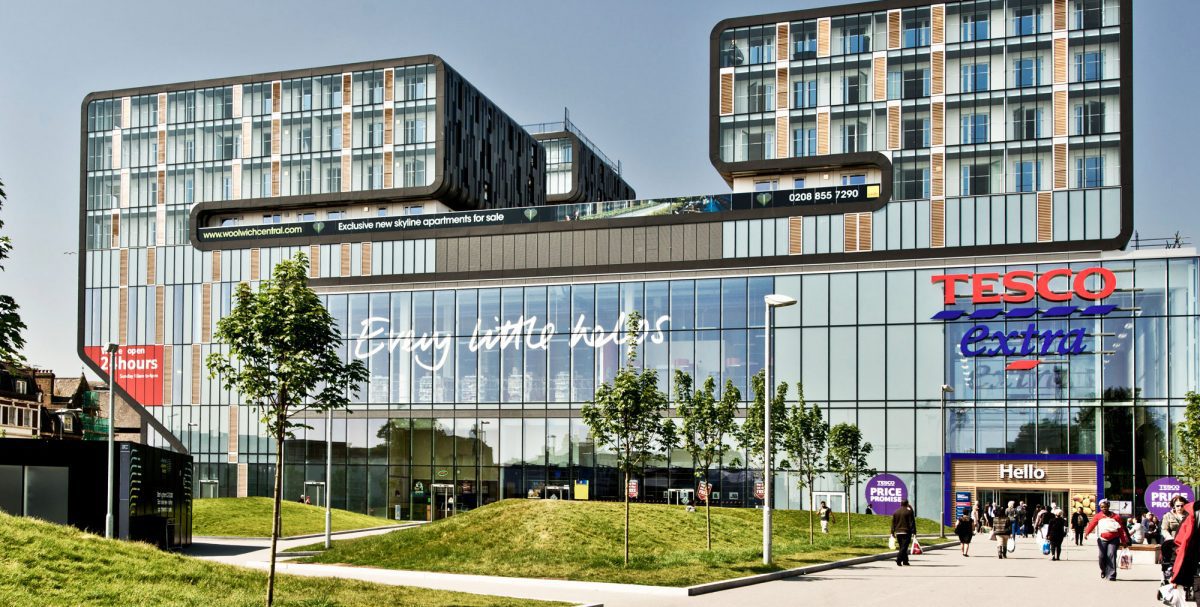 Grocery is sitting under a goldmine. Untapped air ﬂoating on the London skyline is worth billions to supermarkets, say experts. with the potential for hundreds of thousands of new homes to be built above their stores.

Conservative estimates predict enough spare air above retail in the capital t0 build a minimum
150,000 new homes ~ nearly 25% of the 650,000 mayor Sadiq Khan has said the city needs
over the next 10 years to address it’s worsening housing shortage.

And all this untapped potential has property teams at some of the major grocers turning their
strategies to the sky.

Only in November. Tesco CEO Dave Lewis told shareholders that maximising more value from its
3,4oo store estate had become a core strategic aim at the multiple, with plans to save £1.76m in
rent each year and repurpose 1.7 million sq ft of space, as well as releasing new value from
existing sites to the tune of half a billion pounds.

A big chunk at that is set to come from turning empty air into new homes, with developments
under way at Hackney and ‘air rights’ sites already completed in Welwyn and Streatham. The
grocer has reportedly identiﬁed 20 prospective sites in London where building up would create
9,000 new homes.

“In the retail trade that doesn’t go unnoticed.” says Val Bagnall. at specialist ‘air rights’
developers Apex Airspace, who says his team are in conversations with “four of the top six
grocers‘ as rivals look to “copycat” the highly publicised Tesco strategy.

Meanwhile, Sainsbury’s says it is “developing plans” in Whitechapel, Ilford and New Cross Gate
with the potential to create 2,500 homes above stores as it the aims to ‘improve the efﬁciency”
of its £11bn property estate. And as Aldi and Lidl rapidly expand across the UK (building close
to 100 stores between them in 2017) they too are seeking out creative ways to afford high-value
sites both inside and outside London, with mixed-use developments under way in Epsom.
Birmingham and Leicester.

“People don’t think their roof has value, but there’s an appetite in government to give greater freedom to build on top of retail”

The potential is huge, believes Bagnall. “We’ve identified nearly 3,500 acres of land that is
developable sitting on the roofs of London alone, and that’s excluding retail, which could add
another 25%.” he adds. “It’s a sleeping market. People don’t think their roof has a value, in fact
in a lot of cases they see it as a liability, but there’s an appetite in government to give greater
freedoms to build on top of retail and that is the direction we’re looking in.”

Building homes above shops isn’t a new concept of course, particularly in London where space
is scarce. So why this sudden momentum? How lucrative can it be? And how are diminishing
property teams at the major multiples able to manage the projects?

Interest in mixed-use schemes in London, many with homes above stores, has been building
among the major grocers for more than 10 years, says Richard Kitching, development director at
property consultants GL Hearn. Even in the height at the space race “planners would never
accept that having a single-storey supermarket with a sea of parking, which was the historical
approach to supermarkets in the rest of the country. was acceptable in London and 50 more retailers pushed to put residential above their stores ”